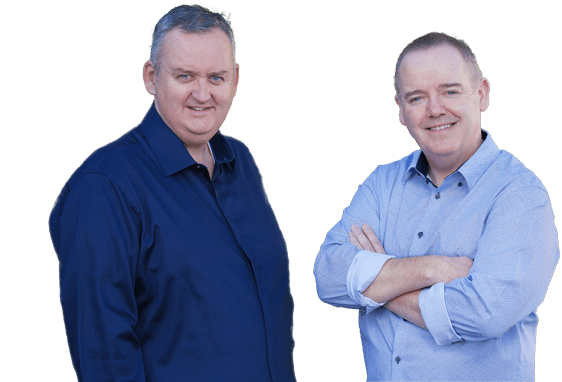 Brought together by a mutual friend, the story of OmniSys began while waiting for a plane.

Colm O’Regan and Colin Whelan founded OmniSys Limited in 2001. They were working together in Dublin during the turn from 20th to 21st Centuries.

Colm being the more senior technically, and Colin, a good sales communicator. They had thoughts for the formation of a new business, but based on a new idea, to offer IT Support services on a month to month basis payable as you go. Not paying a year in advance for service not yet received as all other mainstream IT support companies were offering. In essence, they decided to put their customer service reputation on the line and give new prospects a risk free option in trying an alternative. Obviously this had to be slowly constructed as revenue and cashflow would take time to build. So with a couple of second-hand cars, no office and no staff, they set off out there looking for new business customers who would give the OmniSys Monthly Support Plan a try. It did not take long to win first customers, not hurt by the fact that the Encyclopaedia Britannica training had left Colin with no fear of cold canvassing businesses with a friendly “Hello, can we help you with any computer or networking issues?” On reflection, there is recognition of the favourable time of starting in 2001 as the “Celtic Tiger” was just being born. It was probably a little easier than at any previous time in Ireland, but each new client and success won fuelled the “Is Feidir Línn” OmniSys attitude of the time. Soon new small company vans were obtained for both of the guys and OmniSys had it’s first identity.

In 2003 a new field engineer joined the team, and OmniSys had it’s first employee. Customer numbers grew at a managed pace and then in 2005 Dara Elliott joined the team. By this time having moved into their first shared office in Santry Business Park beside Dublin Airport, owned by friend and client John O’Donoghue Insurance. OmniSys had a wonderful lady helping each day with invoicing and bookkeeping from 10-3pm and there was even an in-house technician and a proper workshop area.

By 2006 the team had grown to 5 staff and 3 branded vehicles. The “Celtic Tiger” was roaring strong but, as known now with hindsight, a change was coming. Following a sudden shocking downturn in sales figures for 3 months in a row, plans to move to a new dedicated OmniSys office were put on hold and an emergency re-structure was embarked upon to ensure OmniSys would be able to fulfil customer support commitments. Many customers had similar issues and it became clear OmniSys had its part to do to in helping customers survive this financial storm. With creative hardware maintenance and support, system life-cycles were stretched out and best value solutions sought to ensure our customers could continue to do the best they could.

2008 saw OmniSys receive help from customer CSHS in the form of a small attic office in their Finglas premises. This help was greatly received and was undoubtedly a major factor in OmniSys survival through this difficult time. Another contribution was the joining to the team of Ronan O’Donoghue, a known and trusted resource following Colm and Colin having worked with Ronan in a previous company at the end of the 90’s. Ronan had just returned from Canada where he has emigrated and was a welcome addition to the team. OmniSys also started to embrace proper Cloud based solution offerings by securing our first Microsoft Hosted Exchange email customers and actively offering Microsoft Business Productivity Online Standard (BPOS which is now known as Microsoft Office365), as a real value road map plan for customers needing to upgrade from old on premise email servers reaching end of life.

2009 saw OmniSys begin to look forward and steadily increase customer numbers. It also brought a time of activity from customers who were now begining to upgrade for the first time following the extension of IT system lifecycle OmniSys had helped with during the previous years.

In 2011 OmniSys happily agreed a new rental deal with CSHS that allowed for moving into bigger offices next door.

In 2014 Niall McKenna was added to the field support team.

The management team took time to consider and decide on forward plan for future growth and formed a relationship with Asentiv to help with these plans.

In 2015 Artur Wrona was added to customer support helpdesk team

July: Colm and Colin attend the Microsoft World Partner Conference in Toronto Canada as part of the forward plan and vision as developed with Asentiv.

October: OmniSys celebrate 15 years in business by having a customer get together morning in the Microsoft Leopardstown facility. OmniSys also communicate their vision and plan outline for more monthly recurring service product developments

I don’t mind admitting that I am a very demanding client, always insisting on being at the cutting edge. OmniSys are my trusted technology advisors, supporting me and my team in bringing optimum solutions to our projects.
Alan Kelly
DMG Engineering
I am a small business owner but involved with numerous sizeable national and international clients. A complete technology meltdown some years ago, (on Friday evening!), left me with a very serious problem. Without Colin’s devoted personal attention to sort things out, a very significant project would have suffered badly.
Alan Bell
Asentiv Ireland
I was introduced somewhat casually to Colin by a trusted member of my own personal network. It wasn’t long before I realised how valuable his expertise would be to our fast paced growth. Our internal operations have improved greatly after just a very short period of time.
Mark Forman
Europa StratgeyP
© OmniSys Ltd. | Terms & Conditions | Privacy Policy download here
Website designed and developed by create.ie